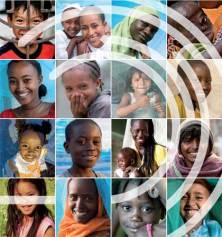 Today (April 25) is World Malaria Day and this year’s theme is “Sustain Gains, Save Lives: Invest in Malaria.” We celebrate the global efforts and successes towards malaria prevention, but also recognize that it’s an ongoing battle. Complete eradication of malaria is one step towards “near-zero deaths by 2015 and achieving the Millennium Development Goals, especially those relating to improving child survival and maternal health, eradicating extreme poverty and expanding access to education (UN).”

Unless you travel abroad, malaria doesn’t seem to be a big deal. In fact, malaria has been eradicated in the United States since the early 1950s. But, half of the world’s population (3.3 billion people) live in areas at risk of malaria transmission. According to the CDC, 35 countries (30 in sub-Saharan Africa and 5 in Asia) account for 98% of global malaria deaths.

Malaria is a serious and sometimes fatal disease caused by a parasite. Wait, I thought mosquitoes caused malaria? Infected mosquitoes carry the parasite and infect humans by biting them. But remember, not all mosquitoes cause malaria. WHO explains, “Only certain species of mosquitoes of the Anopheles genus—and only females of those species—can transmit malaria.” Symptoms include high fevers, chills, convulsion, sweating, nausea, headache, and vomiting.

Even though malaria has been eradicated, there are about 1,500 cases in the United States each year (CDC). Most of these cases are in travelers and immigrants returning from countries where malaria transmission occurs, specifically those in sub-Saharan Africa and South Asia.

If you’re gonna travel and/or GiveYourGap, check out these tips on how to prevent malaria:

For more information on malaria and travel, check out CDC’s Yellow Book.

Some of my favorite (insect-repellant-wearing) memories from Costa Rica & Panama. Pura Vida.